NIPR aims to fulfil the role of a national library for Northern Ireland. NIPR's role to identify, collect, preserve and make available for public consultation, every book, pamphlet, periodical and report published in Northern Ireland since January 2000. 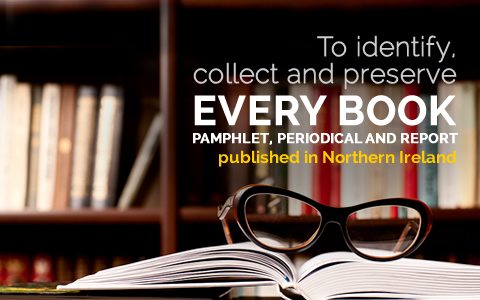 The Northern Ireland Publications Resource (NIPR) was launched in October 2000 at the initiative of the Library and Information Services Council for Northern Ireland, with funding from the British Library. It is a voluntary deposit scheme whereby a copy of every publication is donated to NIPR for preservation and future reference. As of May 2020, there are over 20,000 items in the collection, including books, journals, pamphlets and reports.

Belfast Central Library, now part of Libraries NI, and the Linen Hall Library, Belfast have been supporters of NIPR since its inception. The Linen Hall Library has been NIPR’s lead partner since 2015. The NI Department of Culture Arts and Leisure provided funding for the administration of the scheme until 2016, when the N.I. Department for Communities took over this role. NIPR is very grateful to the Department for its generosity and support.

Following a review in 2013 the name of the scheme was changed to NIPR, The National Collection of Northern Ireland Publications, to reflect more clearly NIPR’s role and purpose.

In 2015 NIPR was granted charitable status by the Charity Commission for Northern Ireland. Registration Number NIC102555.