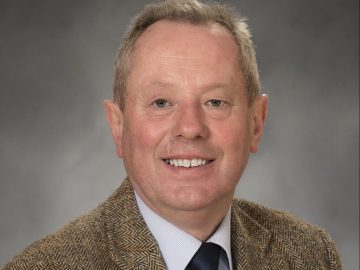 Liam Campbell, lives in the Sperrin Mountains in  Co. Tyrone and is originally Inishowen in Co.  Donegal. He is the Director of the Mellon Centre for Migration Studies, taking up the role in 2021. Prior to that, Liam was Cultural Heritage Officer with Lough Neagh Landscape Partnership and worked as a television producer before returning to academia. Liam has published and lectured widely on heritage and environmental issues, especially about the Northwest of Ireland.  He has undergraduate degrees from NUI Maynooth and masters degrees from both Queens University, Belfast and Ulster University. He completed his PhD at Ulster University in 2011 on the cultural heritage of rivers. He is a visiting lecturer at East Tennessee State University where he spent a year as Basler Chair for Integration of the Arts and Sciences in 2018. He is married to Ann and they have four daughters.